Grandi Campioni Collection – 1974: The year of the Cannibal

Grandi Campioni Collection – 1974: The year of the Cannibal

The Santini 'Grandi Campioni' Collection honours some of cycling's greatest World Champions with a collection of newly designed cycling kits. These limited edition capsule collections feature design elements inspired by the National team colours of the riders they represent, made with Santini's finest materials and technological know how. The first in the series is dedicated to Eddy Merckx's UCI Road World Championship victory in 1974 in which he became the first rider to win cycling's 'Triple Crown' (2 Grand Tours and a World Championship in one year).

Montreal, Canada, was the setting for the 1974 UCI Road World Championships, the first time the event had taken place outside of Europe. The race on the mount royal circuit saw Merckx looking for revenge after the previous season’s loss to Felice Gimondi in Barcelona – a loss that Merckx believed was due to his teammate, Freddy Marten’s collusion with the Italian. That year, 29-year-old Merckx had failed to win any spring classics and by his own admission felt his power could be waning. He had, however, gone on to win the Giro and the Tour, and had a point to prove in Montreal: he was going for the triple crown.

The majority of the race saw the great French rider Bernard Thevenet heroically riding for nearly 100 km in a sold break, Albeit ultimately ill-judge, Thevenets move prompted Merckx to band together a select group of riders to pursue the escapee. This group included the likes of Raymond Poulidor, Giovanni Battaglin, Francesco Moser and even Maertens, who after the previous year’s debacle had come to an accord with Merckx.

The penultimate lap saw Merckx make a ferocious attack, managing to drop both Battaglin and Moser. At the front Thevenet was cracking, and with the last lap looming the French rider had barely 30 seconds on the chasing riders. Merckx’s small group caught Thevenet on the final climb of the last lap, and his teammate Poulidor was powerless to do anything to help him.

As the finale of the race unfolded, Merckx countred an attack by Poulidor, effectively putting the two man into contention for the world title. With just 200 metres remaining, Merckx kicked, powering past Poulidor to the line, and becoming the first rider to take 2 grand tours wins and the worlds in the same season. He had proved beyond doubt that his hunger for victory remained intact.

To honour this outstanding milestone in cycling history we have created a special edition cycling kit using our finest materials and technology. The color chosen was inspired by the Belgian National team kit worn by Merckx on his winning ride.

This specially designed jersey provides maximum comfort. Includes both a rainbow stripes zip and a printed label on the back pocket.

The image of the skull with the crossed knife and fork beneath it is a reference to Merckx’s pseudonym – ‘The Cannibal’.

Stylish bib shorts celebrating the 1974 world championships designed to match the corresponding jersey. Engineered from ‘Thunderbike Power’ fabric for a special compressed fit. They provide breathability and comfort due to the mesh design with highlighted rainbow stripes. 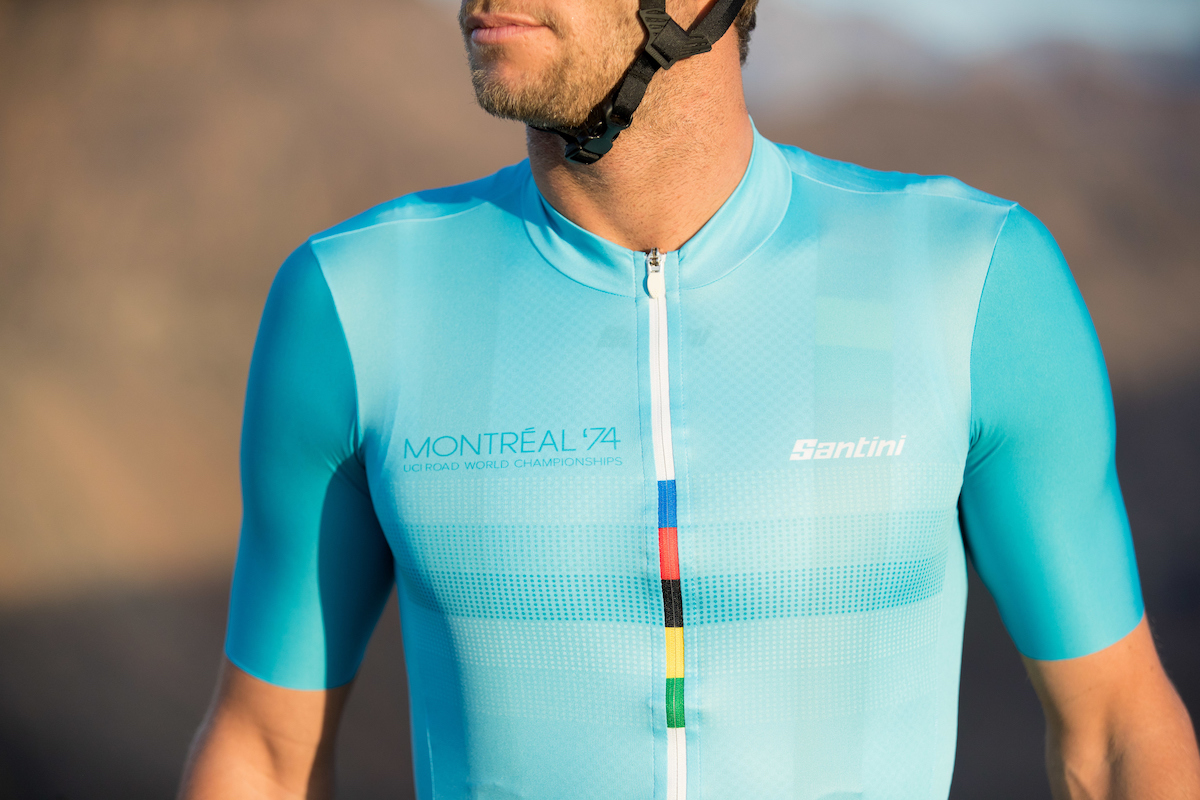 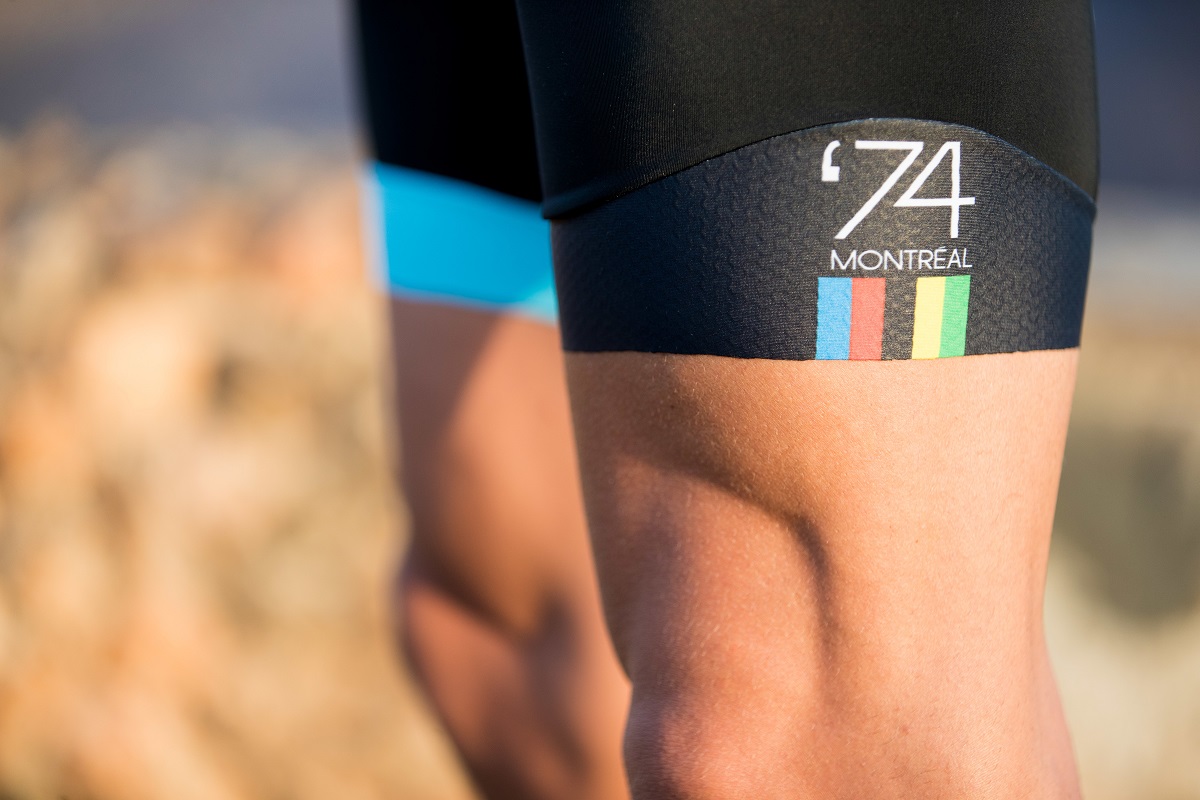 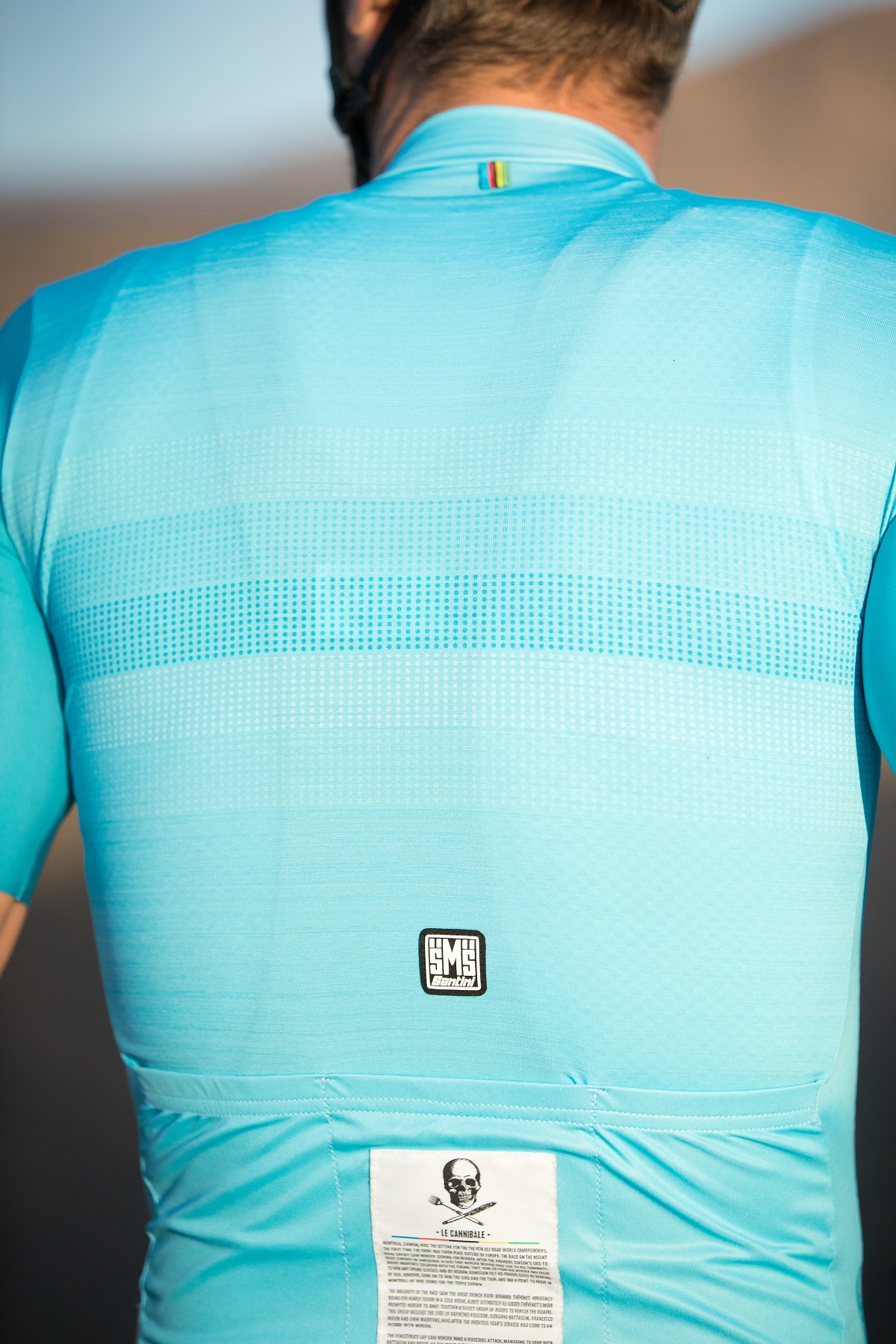