The official opening of the prestigious London fair included the world premiere of the 2020 Trek-Segafredo men’s and women’s kits which this year are made from eco-friendly fabrics woven from recycled yarns. Present on stage for the launch were cyclists Giulio Ciccone and Lizzie Deignan. Santini and Trek-Segafredo also announced that their partnership will continue for the next three seasons.

London, November 1st 2019 – The official launch of the Rouleur Classic, which runs from October 31st to November 2nd, took place last night in the heart of London with Santini Cycling Wear, one of the protagonists at the event, as it joined Trek-Segafredo to present the 2020 World Tour kits for the their men’s and women’s teams.

Two members of the team played an active role in the presentation: Italian Giulio Ciccone is on his maiden year on a World Tour team but won the Mountains classification in the 2019 Giro d’Italia as well as holding onto the yellow jersey for two stages of the Tour de France after taking it in the gruelling Planche des Belle Filles stage. He was flanked by British cyclist Lizzie Deignan who was World Champion in 2015. In her return to competition after giving birth, Lizzie was crowned champion of the OVO Energy Women’s Tour, one of the most significant stage races on the women’s cycling calendar.

«We are delighted to be launching the new kits for the Trek-Segafredo men’s and women’s teams at a fair as prestigious as the Rouleur Classic – declared Santini Cycling Wear CEO Monica Santini – The London event is an important showcase and because we are also there as an exhibitor, we get to show some of the products we are developing for and with pro athletes and which are also available for amateurs».

Giulio Ciccone commented: «I am really happy with the new kit and the first impression I had was really positive. We have reached a top-level quality in terms of materials this year. The Impact area is now bigger on the shorts and that will provide better protection during races and this is something a rider really appreciates. I also appreciate the design, with the right mix of colors and the introduction of the navy blue with white and red».

Lizzie Deignan declared: «I think the team kit is excellent again for 2020, I like the fact that they haven’t changed too much with it because I think our 2019 kit was really striking and popular. We’ve had a really positive year and it’ll be great to have a continuation of that. The Impact panel is really innovative and gives us a lot of confidence because we know if we do crash then we’ll be extra-protected».

Santini and Trek-Segafredo took this opportunity to announce that they will continue to work together for the next three seasons; having started their partnership in 2018. 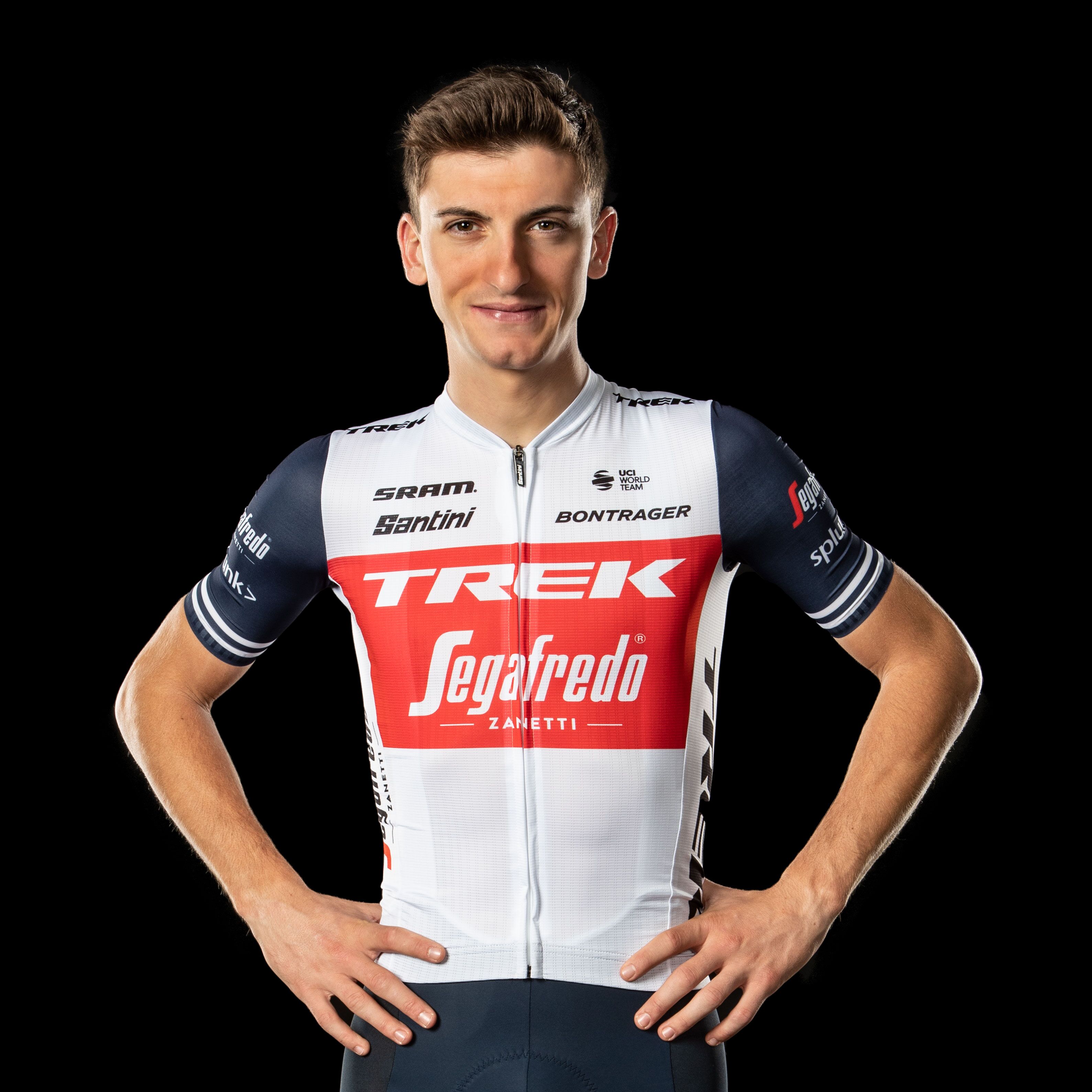 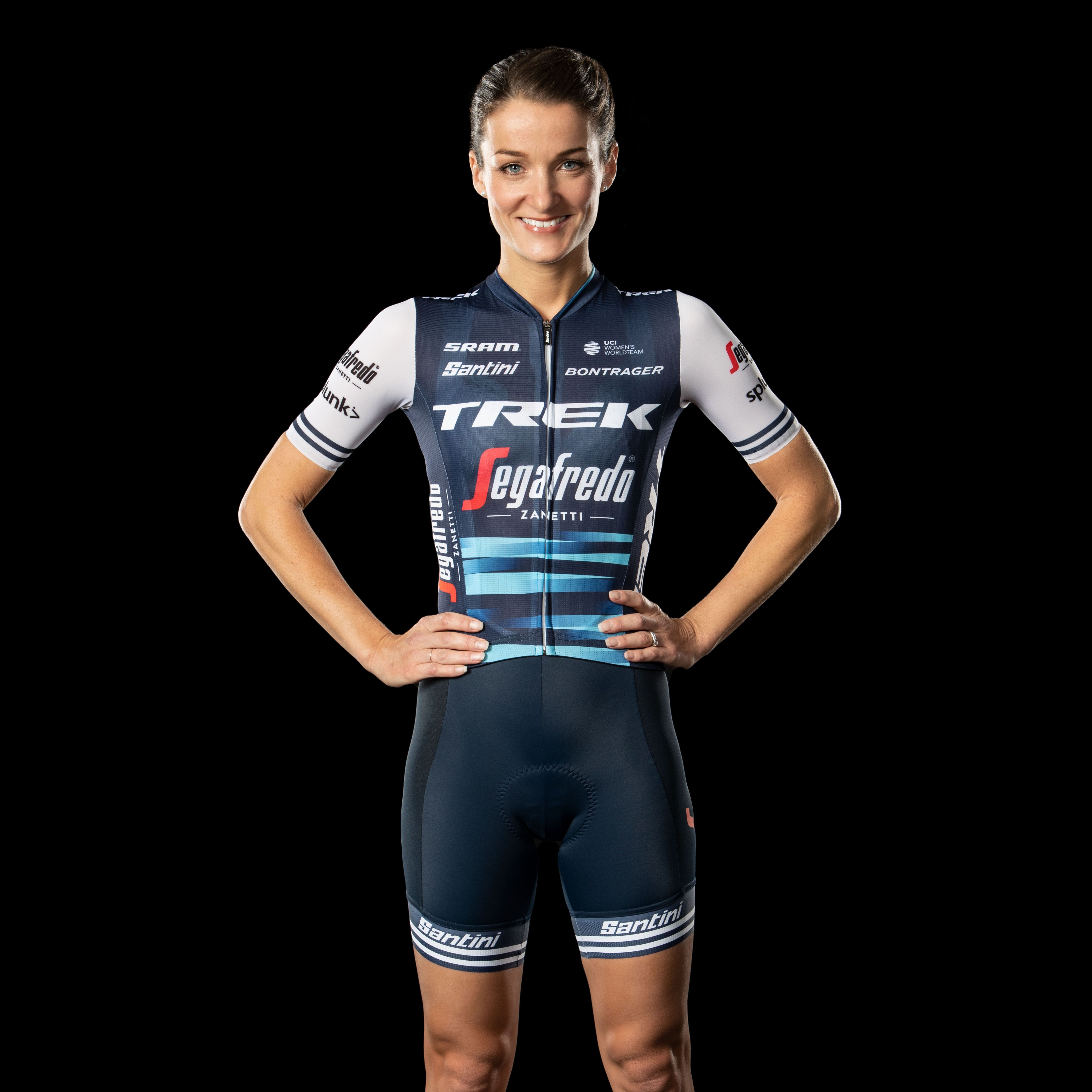 AN ECO-FRIENDLY CHOICE FOR THE 2020 TEAM KITS The main kits that the Trek-Segafredo men and women will be using in competition comprise a jersey made from two sustainable fabrics: Ecofabric RECY by Corno, an eco-friendly product made using yarn recycled from materials that have been used or discarded in the environment, and Native - Ecoknit by Sitip made using recycled fibres and yarns without the use of any polluting chemicals to reduce consumption of natural resources and dependence on non-renewable power.

The men’s team jersey is mainly white with the team’s signature red used for the central section. The sleeves are navy blue like the bibshorts. The outer area of the bib short legs is made from Impact, an anti-rip and anti-abrasion fabric from Sitip. The anti-rip fabric also featured in the previous kits and proved particularly popular with the athletes with the result that more of it is being used in the 2020 kit.

The women’s team kit is a mix of navy and other blues. The jersey is made from the same fabric as the men’s version but has been cut to suit the female body. The bib shorts feature the innovative C3 Woman chamois which is light, shock-absorbent and comfortable.

All of the Santini apparel supplied to the Trek-Segafredo team is made entirely in Italy by our expert staff using quality materials sourced mainly in Italy. This could well be described as a “zero miles” supply chain as Corno and Sitip are based respectively in Monza Brianza and the province of Bergamo, just a couple of dozen kilometres from the Santini headquarters in Lallio.

Trek-Segafredo replica kits will be available online from the Santini site: www.santinicycling.com and from all Trek stores as well as selected cycling retailers worldwide.