Santini: Thanks for talking to us. You've been an announcer for major global triathlon and other sport's events for around ten years, but we know you from our collaboration on the Eroica NOVA project. What drew you to adventure and gravel cycling?

Till Schenk:Around 2010, I was coming back from an extremely severe form of glandular fever that ruined my organs. My doctors said that with the diagnosis, I might never do endurance sports again. I set a goal to do an Ironman to prove them wrong, which I did in 2014. That led to a lot of ambition, and I carried that around for a couple of years until I realized that my heart isn't with racing in the traditional sense. I am slowly developing more and more adventure projects.

Santini:Did the madness of 2020 derail your ambitions?

Till:My 2020 should suck in many ways, but then I looked the other day at the things I've done this year. I started my new year in the desert in Western Africa, in the Western Sahara part of Mauritania, with a buddy. I had my gravel bike and the intent to travel 3,200 kilometers through the desert, all the way down to the Gambia. We were going to ride through places I had no idea existed, like the ungoverned five-kilometer stretch with no infrastructure of no man's land between the Western Sahara of Morocco and Mauritania. It was stunning. And so that's how the year started. 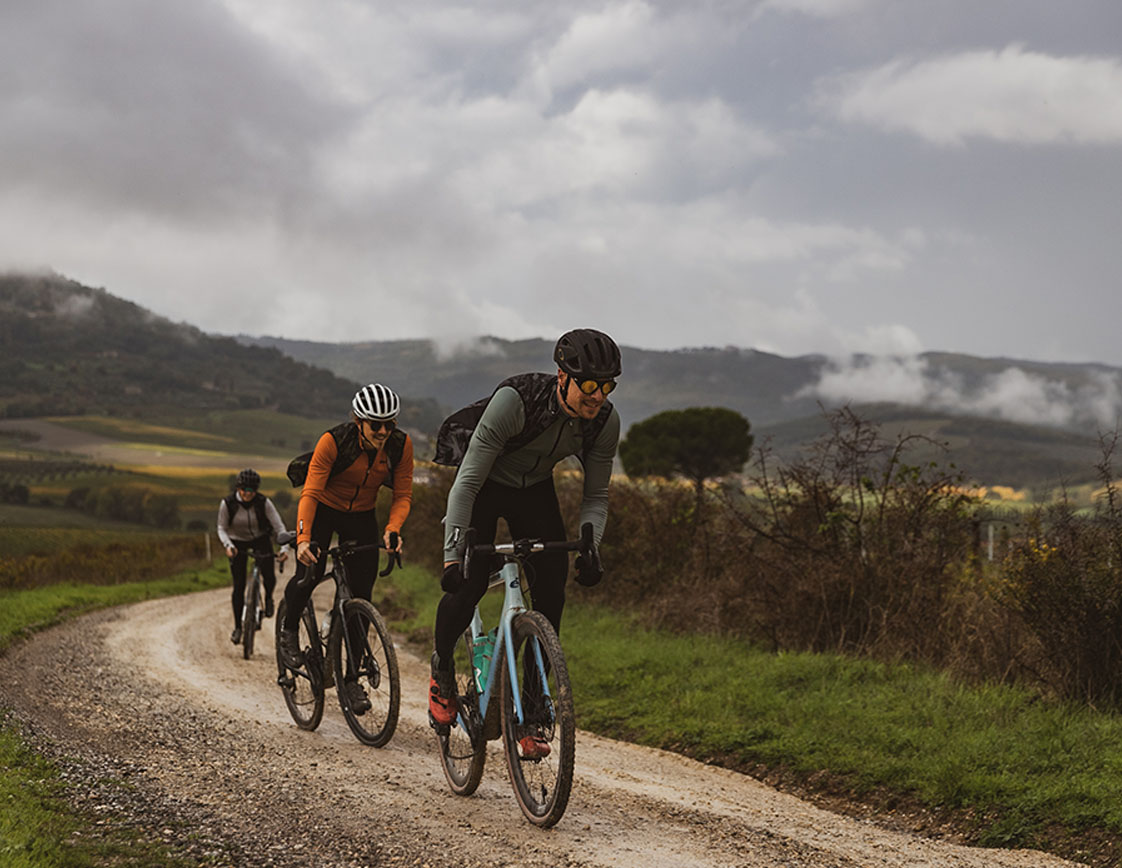 Santini:You also had planned this year for an adventure you were calling The Stupid Seven – seven Everest's in seven countries in seven days? Did you complete that challenge?

Till:We were going for a world record. Well, for my buddy Robson (Lindberg), it was a world record attempt. For me, it was just 'let's see what my body can do going for seven Everest's in countries in seven days. Unfortunately, the plan was derailed by new COVID rules being implemented that very day. We were already on the backup of the backup of the countries. It was like 'Okay, we're done,' but still had an amazing adventure.

Santini:With 2020 out the window, are you able to look ahead and plan your next adventure?

Till:Absolutely. I'm working on a project in Antarctica. But even this year, we're trying to stay active, which is what connected me with Santini. We had initially asked Santini to come on board for the Seven Everest project and visited the factory and everything. That led to an invitation to participate in the new Nova Eroica event and to capture photos and videos of the new Santini off-road and gravel line. The ride was an exclusive social media photoshoot, where it wasn't focused on product pictures for a catalog but trying to tell a story.

Santini:You chose a unique way to travel to Tuscany for Eroica, right?

Till:Yes. We decided not to fly up but instead rented a van and drove up. We had a fantastic road trip. We camped out in the mountains above Monte Carlo and had a great three days in Tuscany's vineyards. We stayed on a beautiful little farm with its own vineyards, livestock, and produce. We had good dinners and excellent wines did some amazing gravel riding. Then participated in the Nova Eroica.

Santini:You made the road trip with friends?

Till:Yes. A couple here from Girona: Clayton Anderson and Molly Supple. They're both American. He works social media for Specialized, and she has her own marketing agency. They're both adventure cyclists. He's done transcontinental and events like that. And she, after lockdown, just grabbed her gravel bike, took a train to the coast of Spain, and went on an absolutely mental route across the Pyrenees. For all three of us, riding is less about racing and more about the whole adventure experience. It's packing your bags. It's being outdoors. It's staying in a tent and exploring new places. Waking up with a sunrise in your tent. Brewing a coffee up on a mountain top. That kind of thing.

Santini:Had you competed in an Eroica event before?

Till:I hadn't. Nova Eroica is, for sure, a great event for people who want to explore gravel for the first time. The best of all, though, is the beautiful location. I mean really, stunningly beautiful. It was just incredible. Stunning sunsets. It's Tuscany! Rolling hills and vineyards, dirt roads, and good food. And sunsets. That's what made the whole road trip so unforgettable. While we were in the area, we rode a couple of routes through Tuscany, outside Florence, in the Sienna region. We visited different vineyards. There was this one stop, a little vineyard with a very geeky vineyard owner who had a bunch of historic bikes in his tasting room. He also had old school pro cycling jerseys. Amazing little place.

Till:My favorite new item is the long-sleeve shirt (a long-sleeve shirt with collars and buttons like a dress shirt, but made for riding – coming soon). I also rode the gravel bibs and the long bibs, which were super surprising to me. But hands down, the button shirt is my absolute favorite. It's perfect. It's warm. It didn't overheat throughout the day when the sun came out. You can pull the sleeves up. It's got style, and it's got that back pocket. You can keep wearing it when you're off the bike. We even wore them for dinner in the restaurant during the vineyard and so on. It's just a super cool functional, but stylish item. So you're absolutely in love with that shirt.

Santini:Santini designers have tried some new detailing in our gravel bibs. What are your thoughts there?

Till:The big surprise for me was the long bibs (GRAVEL bibs). I can't explain to you why, because maybe it is the chamois. I do not ride long bibs normally. But on this trip, I loved them and kept wearing them day after day. They just fit snug as a bug. The chamois was awesome. And I'd always been an anti side-pocket kind of person, but that side pocket came in so handy and was just so practical with so many things, but especially the phone. Easy access to the phone was great.

Santini:Thanks for talking to us. Hope 2021 brings you new chances to take epic adventures on your bike.

Till:Thank you. You as well.