After taking up fixed-gear cycling as a way to get around Seattle while in college, then a move to Los Angeles that opened up a career in road racing, Kelli Samuelson created the LA Sweat women’s cycling team to help women “Cut the crap and be unafraid to just get out there and ride.” Now in its seventh season, LA Sweat continues its dedication to racing at the national and international level. We caught up with Kelli mid-lock-down to talk about bike racing, the history of LA Sweat, and the bonds that tie the team together.

The journey from convenience to competition

Santini: How did you get started in cycling?

KS: My background in sports was dance. I didn't find bikes until later in my life, as a commuter when I went to college in Seattle and sold my car to pay for school. I had a bunch of friends that were a part of a fixed-gear group called Macaframa. One of my girlfriends was like, “I'm getting a bike. We should get bikes and go ride.” And I was like, “Oh, I won't have to take the bus anymore. That would be fantastic.” Then the fixed-gear boom happened and I started racing fixed-gear crits.

SMS: Downtown Seattle is a pretty small area, easy to see how getting around by bike would be easy. When you moved to L.A., how did you find the cycling scene?

KS: Surprisingly, L.A. is very, very bike efficient. It's not something that anyone really talks about, but I can get places quicker in L.A. than I could in a car. It took me 20 minutes by bike to get to work most of the time. Once I got a car, It would take me 45, 50 minutes. The bike is so much more efficient in L.A.” L.A. is also a fantastic place to race bikes. The Southern California cycling and racing community and scene is probably the longest season ever - I swear it's from January to January. There are races every weekend. I feel really fortunate to have found racing in a city like L.A.

SMS: You started proper road racing (with gears) when you lived in L.A. How different were the races from alleycat or fixed-gear competition?

KS: Racing with gears is terrifying. People have brakes and they can use them and that's scary. That's way scarier than a fixed gear race. Everyone likes to say that Red Hook (fixed-gear criterium) is so scary. I say that Red Hook is so predictable - you know what everyone is going to do at any given moment. And if you're observant, you can watch how people are slowing down rather than just waiting to see if they grab a handful of brakes in the turn. I think I found myself not shifting for probably the first six months of road racing. 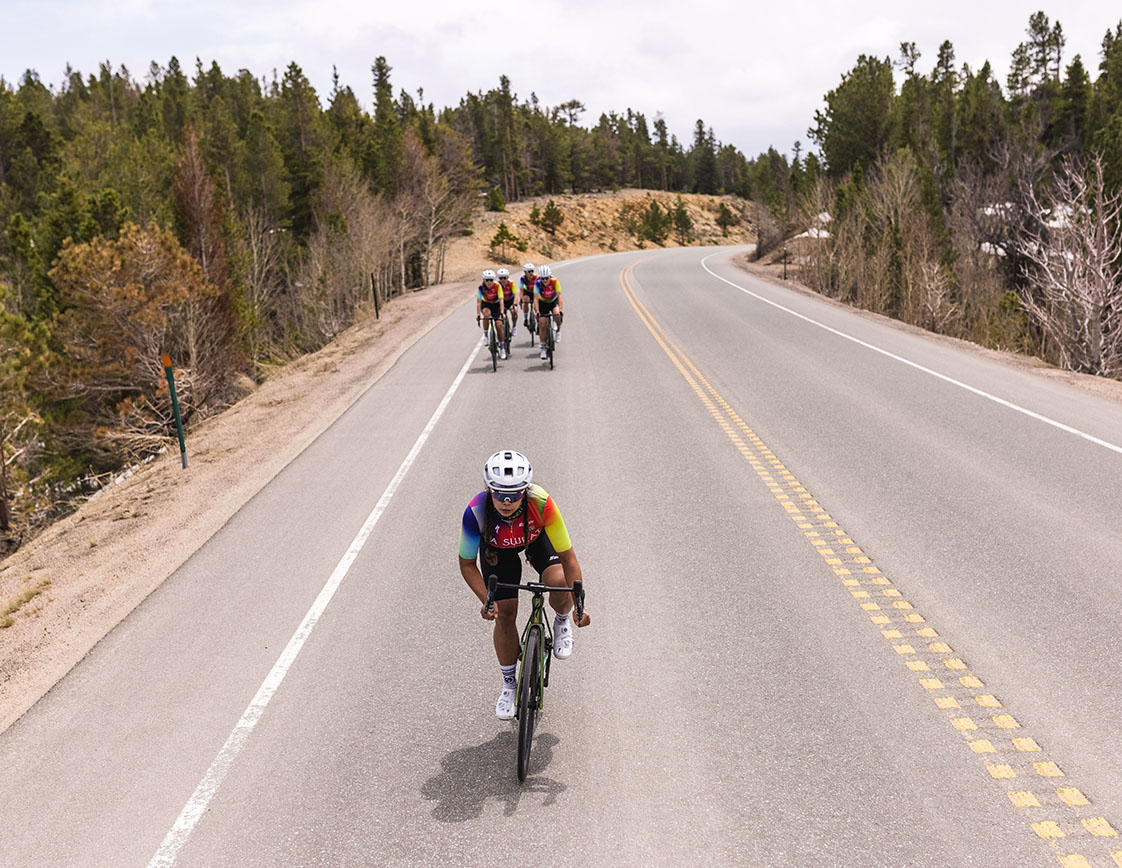 An elite women’s team with a mission

SMS: In 2015, you started the LA Sweat cycling team. What inspired you to take that leap from just being a competitor to starting and running a team?

KS:In the early 2010’s, there were a lot of big women’s road teams, but no teams that focused on crits on a national level.

SMS:What’s the origin of the team name?

KS: The original team was four girls in my Volkswagen Jetta driving around the country going to bike races. Previously I had started the Ritte Women’s Team (we raced for Ritte Cycles, which is a Southern California bike company). LA Sweat is a name we made up (which, Kelli says, can be pronounced La Sweat since she and most of her teammates are no longer Los Angeles-based). I was looking at a bunch of different sports – NBA, NFL, Major League Baseball - and I was dumbfounded as to why cycling hadn't adopted the concept of having a team name that allows fans to follow them no matter who's sponsoring them. I think it gets really confusing when big teams change their name every 12 months, based on who's writing the check. I wanted the team name to be a brand. I wanted people to be able to buy shirts and kits that match and feel like they were a part of something bigger than just a bike team.

SMS: What has been your evolution as a team?

KS: When LA Sweat started, it was a place to develop and then move on (to a bigger team). Now, it's become a place to stay and thrive and be successful. LA Sweat is a place that riders strive to be at, rather than use to get somewhere else. We've become more the goal team rather than the stepping stone team.

SMS: You've said that you wanted to create a team that allows you as riders to connect with fans. How do you manage that?

KS: When I say brand and fan loyalty, it really is just being personable with the community and reaching out. During quarantine, we did five weeks of Zwift rides a week and we invited a ton of people and we did a Discord so they could actually talk to the riders. We do a lot of school visits and shop visits and we really integrate ourselves into the communities we travel to. I think that that's really important for the sport because there are a lot of especially young kids that don't even know that bike racing is a thing.

Dealing with 2020 and its aftershocks

KS: When everyone is secluded in their homes and their small communities, you can feel incredibly disconnected and it can be super lonely, so we have really tried to just stay connected. We talk constantly, we have team Zoom hangouts. I think the larger impact (of the Pandemic) was that four of my girls lost their jobs. Also, we're not just not racing because races are canceled, we're not racing because there is a global pandemic. We’ve also dedicated time to learning how to bake and have taken on other hobbies further our education or career and even started businesses to keep our minds fresh and engaged. If we were just training all the time, especially for the girls who unfortunately did lose their jobs, if they didn't have other things to remove themselves from just thinking about how there's no racing, I think that would be way more difficult. So we try to do fun things - like create a bunch of cocktails with NUUN.

SMS:What about the future? What are you looking forward to?

KS: Simply, I would love to just have a team camp. I think that would be great. And get back to racing. And moving forward as a team, we just really want to continue to push the community to be more diverse and engaging and accepting and do everything that we can to help push the sport forward and not just let it sit where it is. We also hope that racing will resume. Currently, our schedule starts June 5th. We’re hoping all will go to plan. We miss racing. But we understand that unless it is safe for ALL we will not be participating. 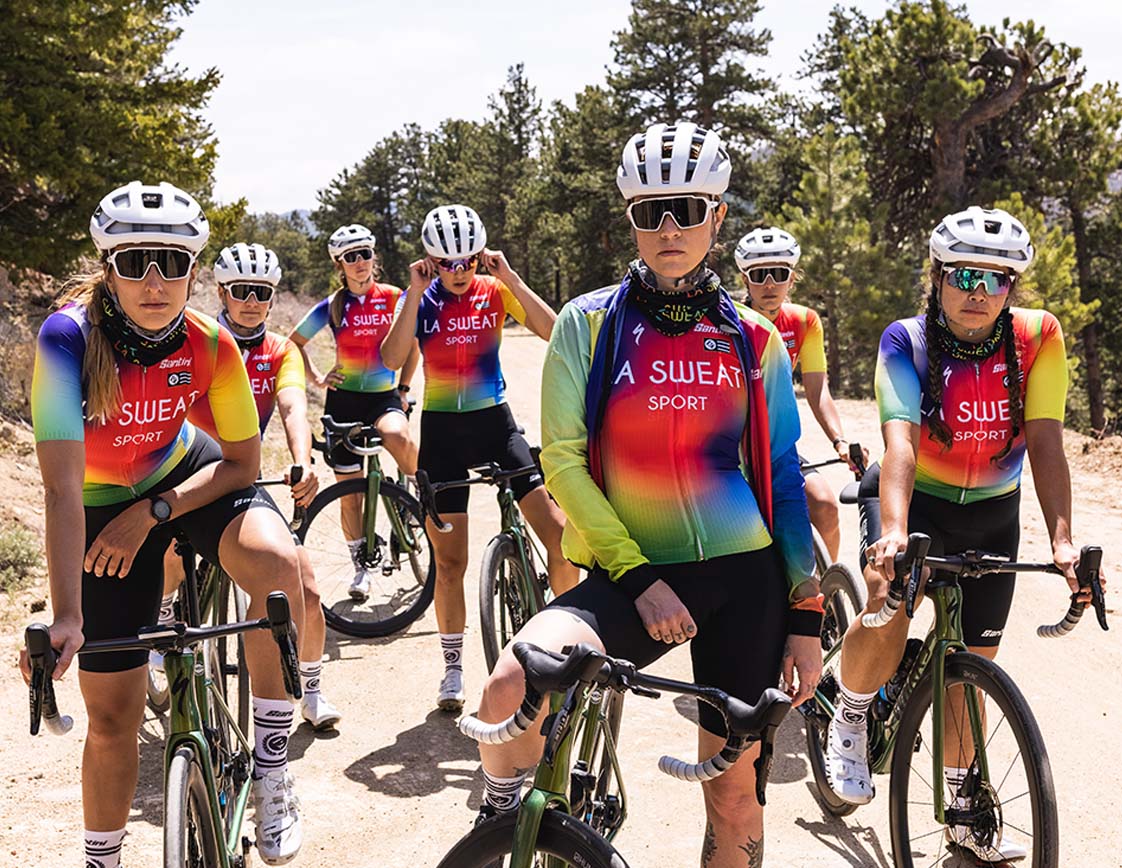 What’s next for LA Sweat

Along with riders Emma Roberts, Emily Flynn, Ashley Weaver, Dani Morshead, Monica Merced, Daphne Karagianis, Sam Schneider, and Katie Mardayat, Kelli is ready for whatever kind of race season 2021 is going to offer. LA Sweat has also recently grown to include a junior development team “LA Sweat has finalized their junior development roster in partnership with Blackstone Bicycle Works in Chicago. Three young Blackstone Bikes riders ages 13-15 will join the LA Sweat Junior Development team based on their commitment to cycling that they have already shown as Blackstone youth program participants. The LA Sweat Junior Program entails one on one mentorship on and off the bike, equipment support to be successful, coaching and training plans, and race day support. We are a team that believes bike racing is for everyone. Their number one rule is “be nice” and these young women embody the team's ethos and will be leaders in their community before we know it.”