LUNDICI: WHEN CYCLING AND FASHION COME TOGETHER

The Bergamo club does give a nod to the chronometer but fashion is where it’s at: “We like to look chic in the saddle”. And its partnership with Santini for its customised kits is proving a real trendsetter!

The evening before their regular weekly spin or Sunday cycle usually goes something like this: 30 or so messages fly back and forth on a WhatsApp group about what to wear. You know what girls are like when they are invited to a party on a Saturday night? “So, what are you wearing?” "How about an LBD?”, “High heels or boots?”, “Straight hair or wavy?” In this particular case, the exchange is more like: “The Miami or the Bora Bora?”, “Light or dark socks?” “What about the shoes?”. Anyone that arrives with a detail or two that is slightly off because they didn’t quite get the message or the outfit they chose was still in the wash, has to pay a sort of fine: they have to buy all the rest of the group a coffee at the first bar on the route (itself decided last-minute).

It might seem a bit over the top, but it makes absolute sense to these guys who like to look fashionable when they take their bikes out. And that means being impeccable from top (of their helmet or cap) to toe (of their cycling shoes). In an amateur cycling world increasingly focused on extreme performance, these men have chosen a different way to stand out. A rather trendier one because, as is the case with the chronometer, the eye demands its share too. It’s a question of style, obviously. And they have style in spades despite not dismissing races and classifications because in the small group of nine Bergamo amateur cyclists that make up the “Lundici” (eleven) club, simply being a great cyclist isn’t enough. You also have to be (perhaps even more importantly) trendy too.

The name - or rather the motto - of the club was inspired by the battle cry of “Go into Eleven!”, (the smallest sprocket on a bikes cassette that requires the greatest amount of force to push, but enables top speed). That says a lot about the spirit that has fired it since its foundation in 2015. The catchphrase has flanked the sporting progression and the growth of this group of cycling enthusiasts who already belong to the Gruppo Sportivo Sarco (sponsored by dealership boss, Giorgio Arrigoni who has been a Santini family friend for over a decade) and is recognised by all the members.

A small core group of cyclists spread out over Greater Bergamo (with Curno as their epicentre), all over 30 years of age, apart from two very welcome “out-of-quota” individuals, all from very different professional backgrounds spanning the spectrum from employees to entrepreneurs: “Maybe because of our age, the experiences we’ve gone through together, as married women who know each other with children born around the same time, it all came together quite naturally,” says Andrea Algeri, of the magnificent nine in the group who although they won’t turn up their nose at mountain bikes for winter training have a strong preference for road bikes.

So, the order of the day is bikes well prepped ready to look good in the saddle. “We like making sure we get all the details just right - adds Algeri- We like being well turned out and chic”. In a word: hot. “We do try to be. We let others do the worrying about being fast,” he quips. This is only partly true because the Lundici guys have plenty of podiums, past and present, to their credit. “We didn’t quit competition – just the idea of being top of the class. Four or five in the group race every weekend. Simone Capelli, for instance, is an absolute monster climber with excellent amateur placings at national level”.

With one additional colourful note: an “Eleven” that gets to the podium standouts out from the rest of the world. “We don’t have club colours and aside from the help our sponsor Sarco continues to give us, we are free to choose whatever colours we like for our kit: nuanced purple, yellow, green”. Nuanced PURPLE? “Yep. We mix everything up very happily and it’s made easier by the fact that we have a single sponsor who helps with the graphics. It not like what happens in some other cases when you have to add another thousand names on your shirt. We are both colourful and coordinated”. 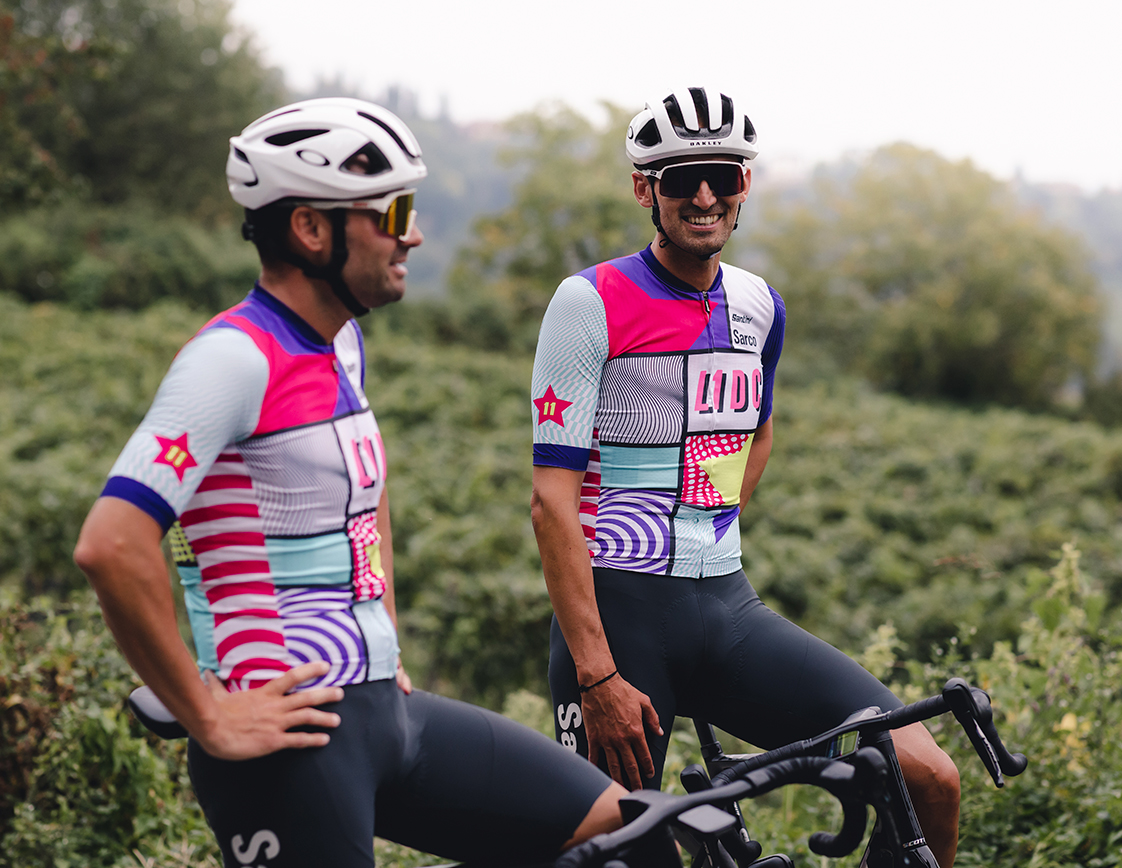 The Lundici autumn-winter collection 2021-22 brought an electric blue kit with silver script and black bibshorts to the cycling catwalk. Black because “they stay cleaner longer,” as Andrea adds with the kind of domestic practicality that goes hand in glove with the imaginative names the guys give to the jerseys: “We have the Miami jersey with a pink background, the Bora Bora with a sea blue background, the Las Vegas, which is a patchwork we created this summer, and the Golden, the gold jersey for the last one to finish”.

All very exotic, rather tropical names…. “They’re places we’d like to cycle,” he reveals. Compliments abound as do requests for the jerseys themselves. “Where can we buy your kits?” is the question that crops up again and again. There’s no easy answer because Lundici is unique. “We don’t always ask Santini for leading-edge cycling wear, the kind that they use in the pro world. We choose top of the range and then we think about customising the kit in the way we want with the company’s design studio which gives us great tips.

We try to stay one step ahead of the current trends. Let’s say we like leading-edge cycling,” says Algeri, talking to us from the roads around Liguria where he on his first spin with his cycling pals in the middle of February. Just like the real ones. There is also a sense of healthy envy. “We do have competitors, a team that called itself ‘Tredici’ to imitate us a bit. Don’t get me wrong: we’re all friends and we laugh about it, but they do try to follow us style-wise”. Which isn’t exactly for everyone as Algeri recognises: “Certain colours on a 30 or a 50-year-old have a different effect, but we have plenty of spirit. My favourite jersey, the Bora Bora, with its white, blue and pink tones, is a colour theme many other teams adopted after us”.

So, at the end of the day, the nine Undici men are genuine trendsetters. Even for the wives, who Algeri himself says are “sedentary but never miss an opportunity to ask us for a jersey or t-shirt that coordinates with our kit. How could we say no?” 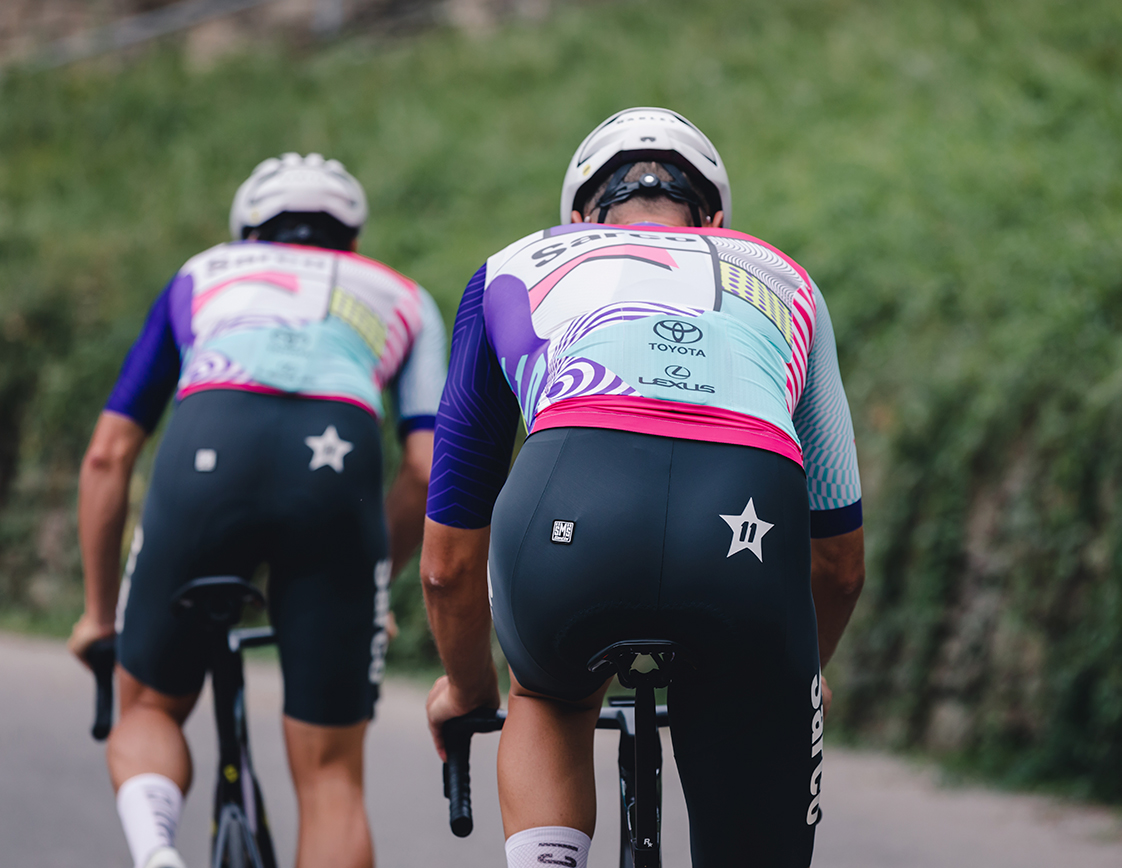 Donatella Tiraboschi
She grew up listening to legendary tales of the cycling greats, always egged on by her father to “Pedal harder so you grow up to be Gimondi!". But after trying out everything from football (as a goalkeeper) to skiing and bocce, Donatella Tiraboschi very wisely decided to take up sports journalism, roaming the entire province with her trusty notebook and pencil in hand to cover everything from Serie Zeta to Serie A. Her cycling heroes include Marco Pinotti and “Prince” Gianni Savio. In her youth she even dreamed of marrying Gilberto Simoni. However, she met one of the great loves of her life at the Tour de France, resulting in wonderful memories and the gift of a bike! She writes for Corriere della Sera.