The story of the Santini designer who moved from Ireland to Bergamo and found a whole new family in his place of work. With five bikes in his garage and a closet bursting with jerseys and kits, he draws his inspiration not just from cycling through the Orobia hills but from chatting with Pietro Santini, who in 1965 founded the company that has now been given the honour of designing and making the Yellow Jersey for the Tour de France.

Maybe when he was busily designing the kit for his local sports club, a younger version of Fergus Niland wouldn’t have imagined himself one day working in the creative department of one of the top companies in his favourite sport. Probably not. But life is full of surprises. After finishing art school in Dublin, he threw himself into living the bohemian life of an Irish artist. But everyday life intervened and Niland took a job as an archaeological illustrator, spending four years working in the countryside of his beloved isle. However, as we said earlier, life really is full of surprises. One of which came when Fergus entered a competition to design the kit for a World Tour cycling team and won. That in turn led to his first encounter with the Santini sisters who quickly asked him if he’d like to come and work for them in Bergamo. The rest, as they say, is history.

Fergus packed in his job and left the rolling hills of Ireland for a new challenge in a very different, very distant country. “I'm an alien, I'm a legal alien, I'm an Englishman in New York” Sting used to sing….” I’ve never felt like an alien: when I came to Bergamo, I found it an extraordinary environment. There was a relaxed atmosphere, it was like a family. Though I did realise one thing as soon as I got off the plane: I needed to learn Italian!” smiles Fergus running his fingers through his moustache.

And so, it came to be that in 2012, the shy, gentle but insatiably curious Niland took the design reins at Santini, a sportswear company which had been dressing cycling’s elite for over five decades. Did that great legacy weigh heavily? “Do I feel the responsibility? Of course, I do. We are talking about the image of a name that is printed on apparel all over the world: there’s over a half a century of history you need to respect here”. But there is more to it than just the history, it’s something unfathomable and difficult to tease out. Something only a person capable of investing a Shakespearian level dedication into a role like this, could grasp: “My job is to meet the needs of cyclists: I have to give them clothes they will feel good in when they ride, but that also obviously function. I wake up in the morning with just one thought in my head: “It’s not about designing apparel; it’s about solving problems”. Fergus Niland is a man very happy to admit he’s obsessed with his work and it’s something that makes him aware of how lucky he is: “Working in Santini is a privilege for me”.: at the start of my career in Ireland, I would draft deisgns of clothes and send them to the manufacturer and that was where my job ended. I lost all trace of the process after that. The manufacturer made the apparel and sent them on to the clients. End of story. And I would begin a new project,” says Niland. “But here in Santini, I still create and design but then I also go down to the production floor at least 10 times a day: I talk to people, I ask what they think, they give me their opinions, which are very important to me, and I see the clothes actually taking shape, being transformed into finished products”. Fergus claims that this is pure magic because in the “factory”, there are dozens of people who have produced jerseys for Bugno, Pantani and a whole slew of other champions besides: “I am very aware of what a unique opportunity this is,” he says, his musical accent becoming even stronger as he confesses. But again, life is full of surprises. 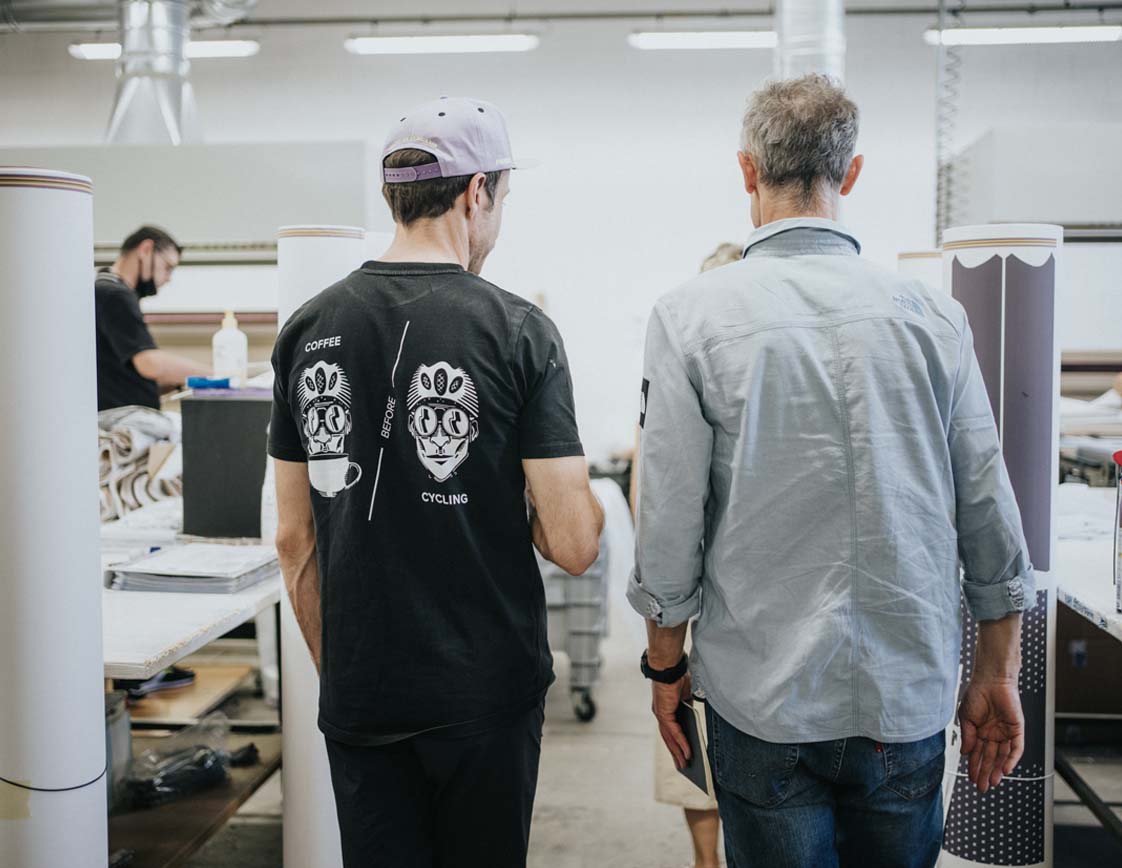 At home, Niland has a garage with five bikes and two closets bursting with cycling apparel, the other part of his job is testing prototypes of the garments he creates, clocking up over 15,000 kms a year in the hills around Bergamo, because cycling is his second source of inspiration. “The first is talking to Signor Santini, Signor Pietro,” he says. “Sometimes I sit in his office and just ask him a question and he’ll start telling me a story, bringing life to the past, about a type of cycling that no longer exists but is still an extraordinary source of inspiration for me”. It’s during these one-to-one chats that Fergus Niland gets a sense of what he needs to do. It’s how he gets the creative side of his brain ticking. He may already have a decade of work and hundreds of designs behind him at Santini but confesses that he doesn’t have a favourite jersey. A bit like Enzo Ferrari who used to say that his favourite car was the one he hadn’t built yet: “The best part of my work is the creative process involved in each piece. When it is made and packaged up, it’s behind me because I’ve already moved on to thinking about the next one”. That thread of restlessness and perfectionism is, of course, what produces even more new designs.

Niland’s days at Santini run smoothly, filled with meetings, while working on collections and all the details that go into them. However, life recently proved itself full of surprises yet again and the big day they’d all been waiting for finally arrived: “The Tour picked us! The Tour….The Tour….” The words echoed through the corridors at Santini but Niland took it very much in his stride: «I remember it was very emotional but there wasn’t huge tension. If anything, the Santini family and I looked each other in the eye, well aware of our skill set: it was a challenge but it was something we knew the company could do”.

And now here it is, the Yellow Jersey, designed and made in Santini’s Bergamo facility: “We developed an extremely technical jersey, the world of bike racing is in our DNA. From the design side, we didn’t fall prey to any easy aesthetic temptations, I wanted to maintain the purity of jerseys: because as our French friends say, 'Le maillot est le trophée'». The trophy is the jersey, and you can’t change that, these are icons…«We worked in a much more subtle way, including a story detailing the significance these garments carry in each of the four jerseys, putting the focus squarely on the race and the accomplishment of the riders who will ultimately stand on the podium wearing them,” stresses Niland. «Seeing the riders getting up on the podium in Paris next July wearing these jerseys will be an affirmation of accomplishment for everyone that works here in Bergamo too: it is what being part of Santini means to us».

All said with the slight reverence of a man charged with dressing the winner of the next Tour de France, an individual who wakes up every morning happily obsessed with solving yet another cycling problem. Who knows what else will happen on the Champs-Élysées? «Because you know life really is full of surprises”. Fergus smiles because that is the truth of the matter. 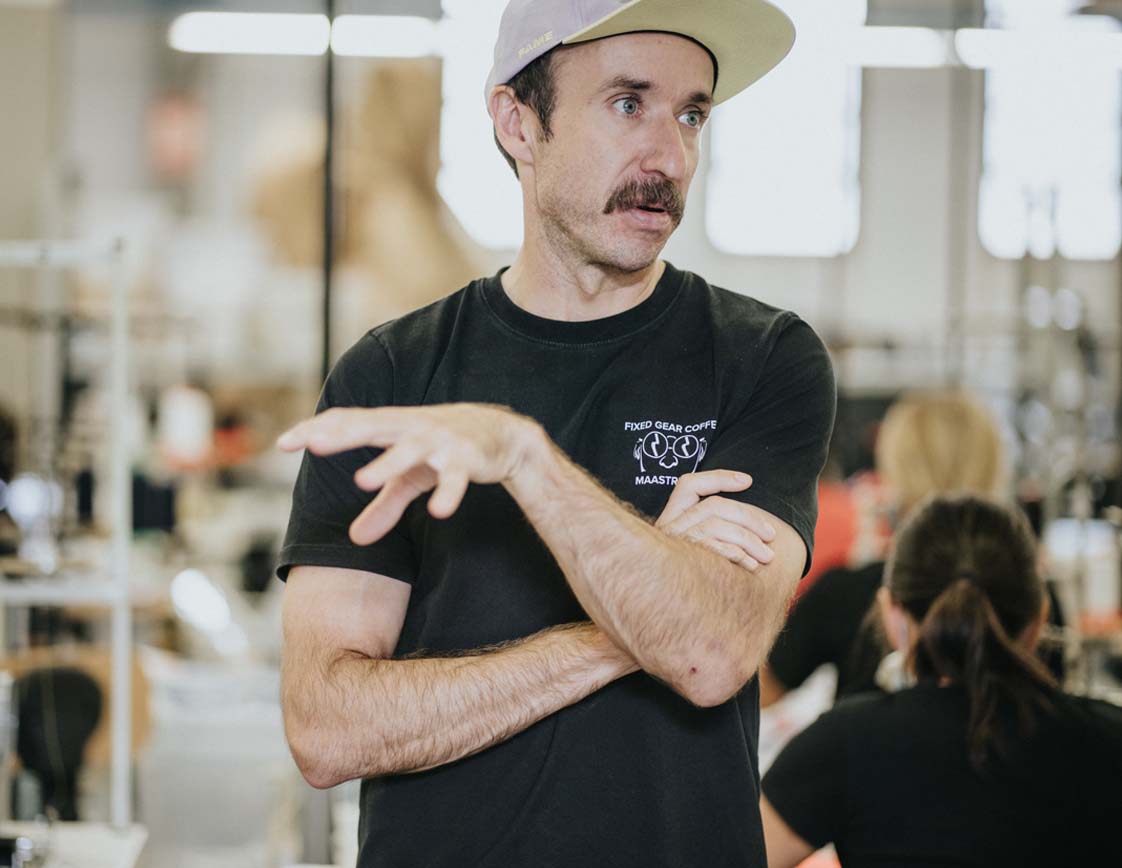 Carlo Brena
Just as he turned 30 sometime in the second half of the last century, Carlo Brena decided to become a sports journalist, a move that quickly saw him begin to age prematurely but also rather contentedly. Since founding the outdoor sports PR agency, LDL COMeta, he has managed to find the time to complete a couple of Ironmans and do a bit of MTB, marathon running, cross-country skiing and ski-mountaineering, in addition, of course, to meeting his wife Mirella and raising two children with her.