Santini and the effects of a broken metatarsal

from our correspondent Carlo Brena

It is a clear sky the one that wakes up the riders of the Giro on the morning of the first of the two rest days of the SenzaGiro: the Adriatic Sea is a straight line on the horizon, motionless in front of the balconies of the hotels in Vasto. In the hotels’ car parks the teams’ temporary workshops are already working on the set-up of the “specialissime” (pro’s bikes): «All of them have to be ready for ten» says a mechanic from the Trek Segafredo team as he adjusts the seat of an Emonda, red as the most powerful of the Ferraris, before the boys go out for a group ride.

«But why don't you make him a pink one?» shouts a Nibali fan from behind the barriers, with an obvious reference to the Shark from Messina being at the top of the ranking. The mechanic does not react, and only after the last tightening with the Allen key, he gets up and disappears inside the workshop van. Meanwhile, in the parking lot behind the hotel, Pietro Santini, shows his pass to the security stewards. Being form Bergamo, he is an early bird: after a walk by the sea, upon his return for breakfast his daughters Monica and Paola, who took over the company almost ten years ago, wait for him. It is called a courtesy visit, an "institutional" presence that companies organise on rest days to shake hands with technicians and athletes, but above all to breathe the team's atmosphere, feel their moods and intercept rumours that will be useful during the season. And here Santini is at home, because since 2018 the company from Lallio, in the province of Bergamo, has been supplying his clothing to Trek Segafredo and even today, when the “Cavaliere” (Knight - Order of Merit for Labour) meets an athlete, after the ritual question about the shape they are in, he makes sure that all good with clothing. «For a company like ours that has made technological quality its brand strategy, it is essential that athletes are satisfied with the garments we supply them - echoes Monica, the elder of the two sisters - because it is the same garments that fans will find in the shops».

Even in situations like these Pietro Rosino Santini, the "Roso" as his friends call him, is a step back from the centre of the scene: he left the helm of the company to the family’s second generation «and it is right that they lead the company, I just look at them from afar» tells us a satisfied Pietro Santini, who, as a matter of facts, is not short of words if he is asked to go back to the times when the post-war wool clothing left the way to the first synthetic yarn fabrics . «Until the first half of the seventies, cycling clothing differed very little from that one from the pre-war period - he says while ordering a coffee in the hospitality area - the wool blend yarn with half acrylic was dominant, and all cycling clothing was made with these knitted fabrics». Of course, it was a solution with numerous limitations: the wool of the time, in fact, did not lend itself to specific uses in the sports field, and was complicated to work, as well as not being particularly hygienic.

«But what makes me smile today is going back to the making of the shorts, certainly the most technical item in a cycling collection: they had no braces and the bottom was made of natural tanned buckskin» and since the leather used tended to dry out after washing, it was necessary to soften the deerskin with water and various types of creams. In short, a heck of a job! Animal, the fallow deer, that started to look around with less suspicion when the international protection regulations banned hunting in the 1980s: «And so the industry has worked to find alternative solutions with the first synthetic fabrics that were either brushed or buffed to make them softer, or which were sometimes padded with foam» recalls with words caressed by a slight melancholy Santini, who in this evolution was certainly one of the protagonists. But in recent years a great novelty has arrived: very thin synthetic yarns containing an elastomer with great qualities: Lycra. It is a new era.

We are past the economic boom of post-war Italy, and it has already been twenty years since Roso, a worker in a mechanical workshop, in the late 1950s, broke his metatarsal while working: plaster and convalescence at home with the family. During the forced stop, he learns the first rudiments of textile art by working on a loom that his older sisters Maria and Natalina kept in the kitchen: «Thanks to my experience in mechanics, I can make some improvements to the loom». It was an enlightenment and, as demand grew, it was decided to hire a girl from the village: Maria Rosa who in a few years became his wife, as well as the head of the administrative area of Santini Cycling Wear.

While in the hotel lobby there is a constant coming and going, and in the distance one can spot a concentrated Nibali, we continue along the story of hundreds and hundreds of jerseys that have come out of the Bergamo factory and that have dressed all the great cycling champions: «Everyone except one, my friend Felice, and I'm really sorry about this». Looking at an ideal book of memories, each shirt has a story of its own, but the one that triggers Roso to tell more is the famous one of La Vie Claire. A jersey that made jurisprudence. «I am introduced to Bernard Tapie during a gala evening and I immediately understand that I am in fornt with a force of nature: he was a former actor, a few records as a singer, he had no experience in cycling but possessed enthusiasm and a unique vision - underlines in a precise and clear memory the founder of the sports knitwear factory - he was the owner of a sports group that would soon revolutionize the logic of professional cycling». In addition to having hired the strongest riders in activity such as the already affirmed Bernard Hinault and the rising American star Greg LeMond, the volcanic Tapie wanted to create something new also in terms of looks in an environment, such as that of cycling, always equal to itself.

«He places an order with us for jerseys with an unprecedented design - the knight opens his eyes wide - he didn’t want the traditional backgrounds of color, that is, a solid colour with some horizontal band insert or on the sides in a different color, so he asked for a shirt with a particular geometric colour composition». Santini stops and mimicking the gesture says: «While I was thinking about how to design it, I would put my hands in my hair». This is how the historic La Vie Claire shirt inspired by Mondrian's paintings was born. An immediate success, not only for the victories (and the internal battles) between Hinault and LeMond, but for the communicational impact. «Yes, that's true, but what a commitment: each coloured box had to be worked separately and then assembled, bearing in mind the addition of the black separation lines». Apparently at Santini, some women on the production floor still remember that almost impossible order and the run-up to deliver the clothing to the French team. «Once packed, I loaded them into the car and brought them in time for the next morning's race». Good old times. 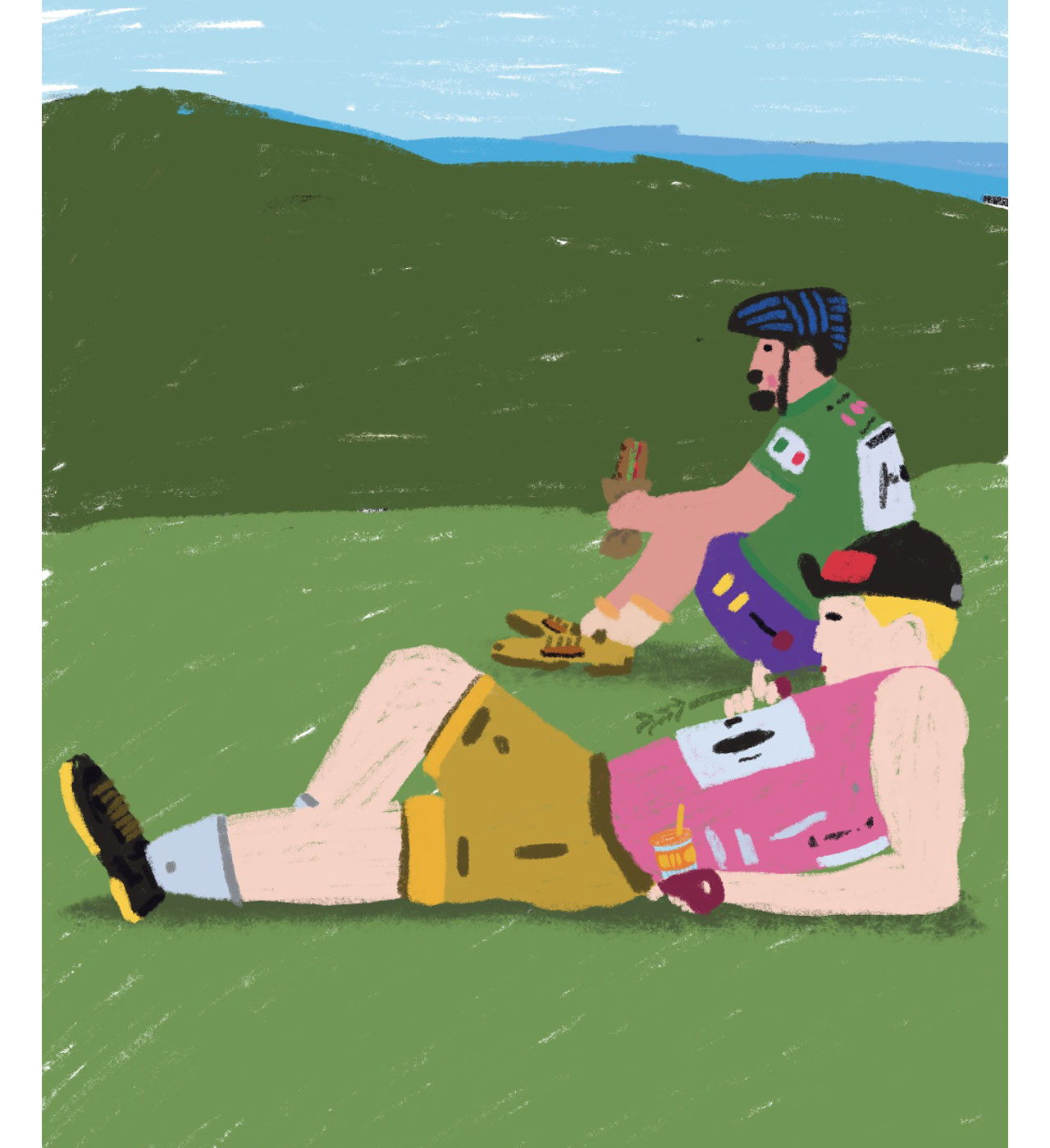